On Sunday 8th April. Graham Davidson and Aunty Em wowed the audience with their live performance at the Newcastle Writers Festival Free Family Day. There were several parts to the performance:

-With the audiences suggestions and participation (as well as the input from the ever helpful Aunty Em), Graham was able to complete the missing illustrations for the new book (with many giggles and excited children wanting to be chosen to provide suggestions)

-Graham drew a picture of Betty the Yeti in her white world, but blessed by a rainbow

There were many laughs and smiles throughout the show, by both adults and children alike, and the time absolutely flew by. Afterwards, lots of people came to the Festival Book Shop to get a signed limited edition print of "Chair", as well as get their copies of "Betty the Yeti" signed and have photos with Aunty Em and Graham.

It was an incredibly fun day, and Emily S. Smith and Graham Davidson really enjoyed being able to mingle with other authors in the Green Room (a big shout out to Greg Dreise who is ridiculously entertaining).

Hopefully we get to be involved in next year's festival!

(Many thanks to Katrina McKelvey and Katrina Howard for the photos they took on the day, shown above). 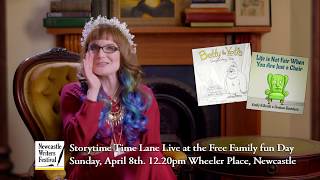